2020 was a very special year for us. A lot of things may not have gone to plan, but the 12th anniversary Defence Blood Challenge sure did. 2020’s Challenge was record-breaking, with over 10,158 donations made in just three months from Navy, Army, Air Force and Defence Public Servants.

This amazing effort reflects the strong relationship between Defence and Lifeblood over many years. Our shared values and commitment to protecting the Australian people shine through in the work we do together.

Defence go above and beyond to protect our nation, our people and blood supply on a daily basis, and we are so thankful for the work they do. Year after year, the different branches of the Australian Defence Force prove their generosity with record breaking donation numbers. 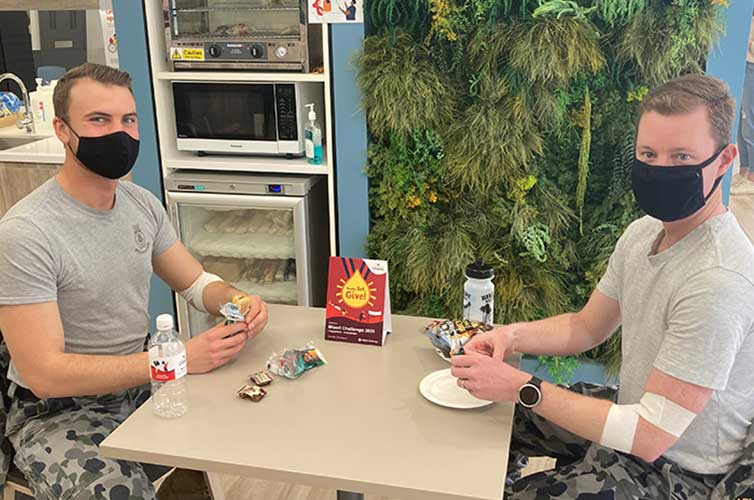 Last year, 72% of Defence team’s donations were plasma, helping meet Australia’s growing demand for plasma. It’s an amazing effort. The difference Defence has made to countless Australians and their families is immeasurable — from saving newborn babies to helping someone through their chemotherapy.

Royal Australian Air Force celebrates its Centenary this year, while Navy and Army share their 120th birthday and they plan to celebrate 2021 by saving more lives.

“This year we celebrate the 100th birthday of Royal Australian Airforce, it’s a great way to come together as the Defence team and we will no doubt ‘soar to new heights’ in all 5 categories in this important annual challenge,” Chief of Royal Australian Navy Vice Admiral Michael Noonan, AO said.

Each year different branches of the Australian Defence Force prove their generosity with record breaking donation numbers. We’re expecting competition to be fierce this year, with Defence Lifeblood Teams across the country warming up to save the most lives.

Spotlight on the IAG Lifeblood Team
Vital reads
Back to top