Blood type, I mean. You may already know that you’re an “O negative” or a chirpy “B positive.” Or one of many other combinations of A, B, O positive and negative.  But what do those letters mean, why do they matter, and what does the future of blood typing hold?

I know my type-I’m O negative-which means I’m a universal blood donor-and similar to about 8 percent of the population of Australia. What does that actually mean?

Imagine for a moment you’re taking one of those Magic School Bus dives into a blood stream. You shrink down to until you’re as tall as about 1/10th the width of a human hair, and you are swept along through the blood vessels with the red blood cells that are carrying oxygen to your cells. You shrink down even further, until you are able stand on one of those cells as if you were using it as a surfboard. When you look down, you can see the individual proteins that make up the surface of the red blood cell. These proteins are like signposts, machines, gateways and scaffolding, helping the red cells maintain their saucer-like structure and do their job.

Antigens are so-named because they can stimulate the body to make antibodies – so they are ANTIbody GENerating.  If your body sees unfamiliar antigens in your blood, your immune system will recognise them as invaders them and try to destroy them.

When we talk about blood types, “A” and “B” refer to two specific antigens on the surface of your red blood cells. These letters technically describe carbohydrate “decorations” on a protein molecule. And because carbohydrates are sugars, we can use sugar decorations to demonstrate the point.  Imagine a blood cell as a doughnut.

People who have the A antigen on the outside of their red cells are type A (think of A as chocolate icing on your blood-cell doughnut).

People who have the B antigen on the outside of their cells are type B (think of B as strawberry icing on your blood cell doughnut).

People who have blood type O don’t have either type of decoration (think of an un-iced, classic doughnut).

So what about the positive and negative?  That’s another antigen, called the “Rhesus” or “D” antigen, that is completely separate from A, B and O. 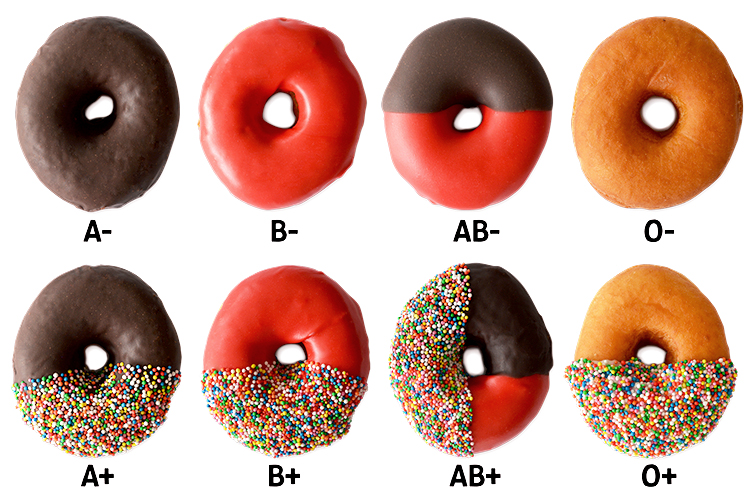 Why do we worry so much about blood types? It’s because of those antibodies we mentioned before. If you are blood type A, you will develop antibodies to the B antigen and vice versa. If someone has antibodies against a blood group antigen, and they have a transfusion that contains that antigen, the antibodies will attack and destroy the foreign red blood cells. This is not only a waste of a good blood transfusion, but the broken blood cells can overload the kidneys with iron, which can be fatal.

So now we know that matching blood types is important, and we can see why the “O negative” plain doughnut is the universal donor (there are few antigens on the surface to provoke a response), and why people with AB positive blood type can take pretty much any blood type (they are used to all the trimmings).

But it gets a bit more complicated. The ABO and rhesus blood group antigens are just the most “clinically significant” antigens, which means they are most likely to generate destructive antibodies, and therefore are super important to match in any transfusion. Apart from these, though, there are literally hundreds of different blood group antigens across 36 blood group systems. (Each system is a molecule on a red blood cell’s surface that may contain one or more antigens.)

If I needed a transfusion, since I’m O negative, you could find an ABO match for me in about in about 8% of the population in Australia. If you needed to match all the antigens in my blood, it would be much more difficult (closer to 1 in 10,000).

Going back to our doughnut analogy, the full picture of antigens on red cells look more like this: 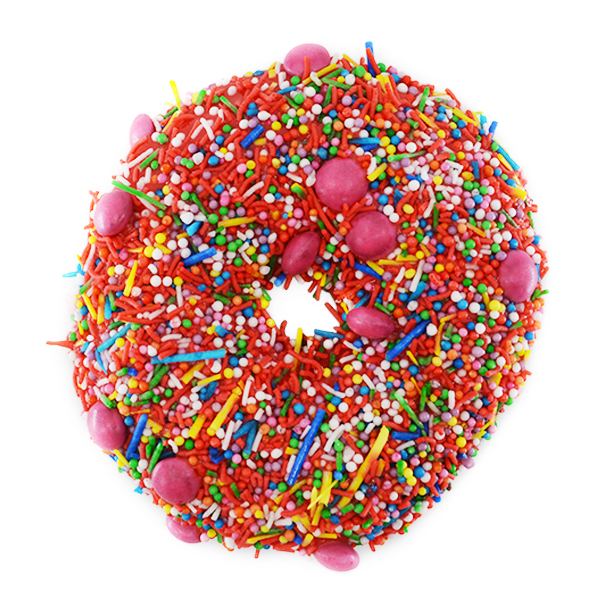 Obtaining a perfect match between donor and patient isn’t always necessary, but for people who need regular transfusions, it’s important to match as many blood groups as we can. If we don’t, they may develop antibodies that make it harder and harder to find compatible blood as their treatment continues. For example, people with thalassemia and sickle cell anemia sometimes need many transfusions every year, for life.

Traditionally blood typing is done using antibodies. A pathologist takes a patient’s blood sample and mixes it with an antibody against a certain antigen, which means one antigen can be checked per test. You can imagine it can be very time consuming to do a full blood group test. But because blood groups are determined by your genes, we can now use genetic testing to determine many blood groups at once, which can help us solve cases where no test exists.

At the Australian Red Cross Lifeblood, one of our research groups is using the latest genetic techniques, including massively parallel sequencing, to characterise new blood group antigens. They have found a number of new blood group antigens in the last few years, and are working hard to improve our ability to quickly and accurately match blood types for all patients.

This blog was originally created for the Illinois Science Council